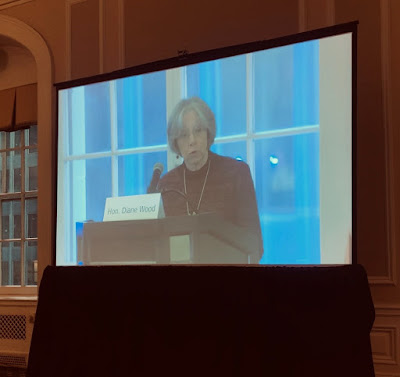 Every Halloween, if the moon is right, the AmeriKat ventures west to the windy city of Chicago to take part in the UIC John Marshall Law School Annual IP Conference organized by the ever energetic Professor Daryl Lim.  This year marked its 63rd Annual IP Conference.  But this year the moon wasn't quite right, so instead some Kat friends appeared in Chicago.  Having arrived in an unexpected Halloween snow storm, Amy Crouch (Simmons & Simmons, London) was ready to report and excited to be speaking on the afternoon patents panel session.

"After a rousing introduction from Daryl and Susan Posner (Provost UIC), the conference was opened by a keynote address from Hon. Diane Wood (U.S. Court of Appeals for the Seventh Circuit) on the topic of “Antitrust & IP: Does it Need to be Retooled?”

Chief Judge Wood explained that, in her view, there are reforms that could be helpful to rejuvenate the intersection between IP and Antitrust law, particularly on the procedural side, but also in some substantive respects.  The question to be asked is:  has the right balance been struck to date between intervention and restraint?  To date the approach taken, whilst not being completely hands off, has been fairly cautious which begs the question as to whether that has been a mistake for 21st century industries.

Whilst there are things that can be done to preserve competition as it is in the market, once a tight oligopoly is established, the tools for fixing that are quite limited.  This is true in relation to both conventional property and IP.   IP is of course a type of property; it is simply harder to define, but for the purposes of antitrust the same analysis is applied:  agencies do not presume that IP creates power in the antitrust context, rather it depends on the usual criteria.

Importantly, IP is a whole and should be considered that way.  However, that is not how it is considered procedurally; where instead patents are carved off into one corner and everything else is dealt with separately.   A choppy system is created as patent appeals are dealt with by the Federal Circuit, whereas anything else goes to the state Appeal Courts.  This means that all types of cases that deal with patents more generally don’t go to the Federal Circuit, for example licensing disputes which end up in the regular Appeal Courts.   Another lacuna is created by the fact that the statue dictates that “compulsory” counter claims for patents fall under the exclusive jurisdiction of the Federal Circuit, whereas “permissive” counter claims go to the regional courts.

Chief Judge Wood was of the view that this should change so that only one Court has authority over any one patent and that choice should be optional to allow the parties to decide the Court.  This would allow the development of different thinking in the Courts.  Statistics show that the Supreme Court has suffered from a lack of diversity of thinking in this area.  Since 2000, they have affirmed the Federal Circuit 28% of the time and reversed it 72% if the time – so it is clear that there are other views out there.  As such, the key procedural reform supported by Chief Judge Wood is to allow IP to be viewed as a whole in the tribunals.

In terms of substantive reform it is less clear.  Much of the recent commentary in the US is calling for more aggressive intervention, in particularly in relation to big tech companies. Is SEP and FRAND licensing a good way to do this?  Whilst this may work for IP, Chief Judge Wood was personally sceptical of how such an approach could be applied to other types of property.

The session then continued with a panel session on the same issues, moderated by Daryl .  Koren Wong-Ervin (Qualcomm) explained that the Department of Justice Guidelines do highlight that IP is a type of property and also that ease of appropriation will be kept in mind.  Whilst ideally there is a desire to provide it to everyone, the incentive to innovate is important.  In Koren’s view there is a risk of equating the concentration issue with an effect on consumers.  The concentration contention is not taking account of relevant antitrust markets but looking at hugely broad categories, not quite in the realm of “all plastics” / “all metals” but nearly this extreme in scope.  A fundamental flaw in the court’s reasoning on SEP compulsory licensing to date is the failure to appreciate that licensing at the device level is more valuable than licensing at the component level, which does not fully value the IP.

Andrew Finch (Paul Weiss, previously U.S. Department of Justice’s Antitrust Division) explained that there is a sea change from the previous view at the DOJ.  The DOJ intervened in the recent FTC v Qualcomm case (in which Judge Koh found in favour of the FTC) and now on appeal.  The policy of the current administration and head of the Antitrust Division is in some senses a re-balancing of the risk of hold up versus hold out.  All three briefs submitted by the DOJ reflect the view that the failure to licence on FRAND terms does not in itself equate to an antitrust violation.  Instead that must depend on what happens in the market.  The antitrust movement being seen today is on a scale that hasn’t been seen for a hundred years - including presidential debate.  The market concentration debate is an important one to be having right now and the DOJ have walked right into that debate; as shown with Qualcomm case, if they don’t agree with the FTC in a market of significant importance then then will step in.

Milan Kristof (Court of Justice for the EU) explained that interestingly a different approach has been taken in Europe.  In the UK the Supreme Court has just heard the appeal on the extraterritoriality and global FRAND issues.  From the CJEU’s perspective, where a patent holder has given a commitment to license on FRAND terms, and there is a willing potential licensee, then an injunction based on the SEP may be an abuse of dominant position.

Steven Geiszler (Huawei) commented that it is difficult to even know what best practice is:  as a matter of contract or as a matter of antitrust law?  It is one thing looking at the appellate level but at the district court level it is clear that different judges have different views.  As a result, every party has its own preferred Court and legislative framework that it wants to work through.  Economically there is also a very important debate about licensing at the device level versus licensing at the component level.   The current Qualcomm case clearly shows that the FTC are one side philosophically and the DOJ are on the other side.

Anne Gron (Alix Partners) gave the economist viewpoint, being asked to what extent should we be concerned that the likes of Google, Amazon and Facebook have a huge proportion of data?  Should they be under an obligation to share it with other companies who might need it?  In Anne’s view there is a concern that reduced competition in markets with strong digital platforms can harm consumers.  “Tippy” markets are often seen in areas of strong IP; such markets tend to tip to one platform.  This results in periods of intense competition until the market tips and there is then a period of waiting for new platforms to come up.

One particular concern is that companies with strong data platforms can use their position in the market and data collected to acquire competitors before they are large enough to come to the regulator’s attention as a likely “competitor”.  These are sometimes called “killer acquisitions” as the platform acquired is often then shelved and not developed any further.   This can often be identified more easily in the pharma industry than the tech industry.   Whilst there are of course arguments that start-ups want to be bought, the concerns of economists are that the power of the dominant companies is very strong.

Asked about whether the US Courts should do something to disseminate technology and facilitate access to platforms, Chief Judge Wood stated that abuse of dominance assessments may be best carried out by an administrative agency as is the case with the European Commission.  In the US, if a monopoly is found to exist then all the Courts can do is break it up.  The European Commission, on the other hand, has a more flexible toolkit and can impose a civil fine, such as Google’s €2.4 billion fine - which even they must feel in their balance sheet!  Milan Kristof commented that the Google decision is being appealed and so we will see what the General Court thinks about that in due course.  He also noted that the European Commission is investigating Amazon over the issue of owning the platform on which its own products sell well.

Asked about the fact that the Federal Circuit has exclusive jurisdiction over patents, but that the judges clearly have very different views and what can be done to reconcile this, Koren noted that she was surprised that in the FTC v Qualcomm case there was not more reference to other Federal Circuit cases.  Steven commented that it should be kept in mind that SEPs are either owned by a larger innovator company or may have been sold to a NPE. In the German related case to the UK Unwired Planet case, the patents were sold with a view to extracting a high royalty rate but without passing on the FRAND commitment.  The Appellate Court in Dusseldorf found this to be an antitrust violation – i.e. selling on the patents but not the FRAND commitment.  In Steven’s view that had to be the right decision.  Milan commented that there is now European Commission guidelines on this point, namely that there be a requirement to ensure that the onward entity in any sale is bound by the same FRAND commitment. "

Reviewed by Annsley Merelle Ward on Thursday, November 21, 2019 Rating: 5
The IPKat licenses the use of its blog posts under a Creative Commons Attribution-Non Commercial Licence.