Book review: The Cambridge Handbook of Copyright in Street Art and Graffiti

Hayleigh Bosher Wednesday, June 03, 2020 - Book review, copyright, graffiti, Hayleigh Bosher, street art
The Cambridge Handbook of Copyright in Street Art and Graffiti, edited by Enrico Bonadio (City University of London), is the first book to bring together a comprehensive analysis on the issues of copyright and street art, providing a timely volume of various perspectives.

Graffiti has taken on a new image in recent years; where it can be defined as criminal activity it is also now recognised as an artistic undertaking and commercial opportunity. Within the book, the terms street art and graffiti are used interchangeably. Bonadio recognises in the introduction that there is a difference between the two artistic movements, although the line between them is often blurred. He states that graffiti refers to the technique of stylishly painting names and letters on urban surfaces, such as railway lines or walls. Street art, on the other hand, refer to more elaborate forms of art such as images or murals. 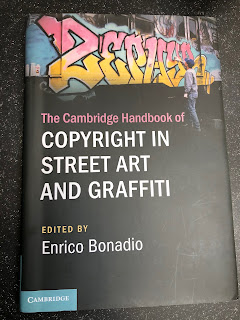 The book is presented in two main parts, each containing a number of sub-sections, with 20 chapters overall. Part 1 is titled "Creativity in the Street Between Misappropriation and Destruction: The Role of Copyright and Moral Rights"and consists of two sections. The first section takes a Sociological Perspective in three chapters.

Chapter 1 - “A Set of Premises for the Scrutiny and Interpretation of Graffiti and Street Art" by Heitor Alvelos – sets out to familiarise the reader with key aspects of graffiti and street art, laying the ground work for the subsequent debates of the later chapters. Starting with a broad historic overview, Alvelos clarifies the focus of this book to be on the term graffiti as it originated around the 1960s urban youth culture in North American cities, which then spread around the world. It is argued that graffiti should, in fact, be considered as a constructive socio-cultural catalyst, in contrast to its common understanding as an expression of social misalignment. Alvelos then breaks down the components of the urban phenomenon. The lexicon is explained, such as “Toy” meaning a writer (graffiti artist) lacking in sophistication and experience, along with the deontology - rules of engagement, and the taxonomy; different expressions of graffiti such as tags - the signature of the artist.

Chapter 2, by Ronald Kramer, is titled “Graffiti and Street Art: Creative Practices Amid 'Corporatization' and 'Corporate Appropriation’”. Kramer draws attention to the illegality of graffiti and argues that this is merely incidental. In fact, Kramer states, graffiti is driven by much more than a search for thrill or excitement, rather, it is about creative desire and translating mental conception into material form.

Chapter 3, “Decontextualisation of Street Art”, by Peter Bengtsen, explains the rising prices of graffiti on the art market, which has led to increased monetary potential for artist and removal of works from the street in order to sell. Bengtsen argues that copyright claims could be utilised to prevent these extractions but doing so entails significant disadvantages for artists, such as revealing identity or lack of resources for enforcement.

The second section of Part 1 looks at “Preliminary Legal and Policy Issues” in three further chapters. In Chapter 4, titled “Copyright Protection of Illegal Street and Graffiti Artworks”, Paula Westenberger argues that copyright protection could and should be protected by copyright in line with the Berne Convention and the UN International Covenant on Economic, Social and Cultural Rights. Westenberger goes further to suggest how the stakeholder interests should be balanced and, in particular, that unauthorised commercial exploitations of illegal graffiti should not be allowed.  Chapter 5, by the editor Enrico Bonadio “Conservation of Street Art, Moral Right of Integrity and a Web of Conflicting Interests”, expands on the legal and policy issues raised by attempts to preserve street art. In Chapter 6, “Works and “Walls: Graffiti Writing and Street Art at the Intersection of Copyright and Land Law”, Marta Iljadica asks “who owns the work on the wall?” as an opportunity to explore the interaction between different types of property rights. Iljadica discusses the complex layers of this questions, identifying a public interest, integrity, culture and the commons, and the interplay between public and private law as components in this debate.

Chapter 20 offers a counter view by Andrea Baldini, who argues that copyright is incompatible with the essential subversiveness of street art. Baldini suggests that copyright’s commodification of street art and absorption into the mainstream art would jeopardize the identity of graffiti and could very well accelerate the death of the art form. Although, in agreement of other chapters, such as Westenberger’s, that graffiti should not be appropriated, Baldini suggests an alternative solution to this phenomenon that relies on cultural rights as apposed to copyright. This would, Baldini argues, provide a legal framework to address corporate appropriation without compromising street art’s rebellious identify.

This book is a delightful read for anyone interested in the modern contours of copyright protection. It provides a well-rounded study on the present perspectives and jurisdictional approaches to contemporary graffiti and street art. It is a thought-provoking book that offers a basis of sociological and legal understanding of graffiti, before posing questions and presenting an array of arguments.

Book review: The Cambridge Handbook of Copyright in Street Art and Graffiti

Reviewed by Hayleigh Bosher on Wednesday, June 03, 2020 Rating: 5
The IPKat licenses the use of its blog posts under a Creative Commons Attribution-Non Commercial Licence.