[Guest Post] These boots are made for walking...and not for copyright protection

Alex Woolgar Sunday, June 28, 2020 - #copyright, Alex Woolgar, Cofemel C-683/17, copyright work, danish supreme court, Denmark, hanne kirk, InfoSoc Directive, originality
The IPKat is delighted to host another guest post from Hanne Kirk and her team at Gorrissen Federspiel (Denmark), this time regarding a decision from the Danish Supreme Court which demonstrates that the debate caused by the CJEU's landmark Cofemel decision is far from over.

These boots are made for walking...

…and not for copyright protection.

These famous words of Nancy Sinatra came to this GuestKat as the Danish Supreme Court earlier this month gave a decision concerning the question of copyright protection of works of applied art, to be more precise of apparel. The dispute concerned a pair of rubber boots designed by the Danish entrepreneur and designer Ilse Jacobsen. The rubber boots with laces came and still come in various colours, however the decision only revolved around the boot model in black with red laces – a combination marketed and sold by Ilse Jacobsen during Christmas season.

The disputed products were designed in 2000 and put on the market in 2001. In 2015, Morsø Sko Import, launched their pair of rubber boots, the 'VRS-boots'. The VRS-boots were marketed in Danish supermarket chains and in several online stores, where the product was sold at a significantly lower price than the price of Ilse Jacobsen’s boots. As shown below, the boots looked rather similar, although with differences appearing in the text print and details on the back of the boots. 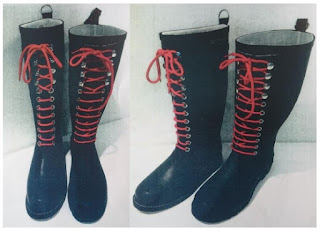 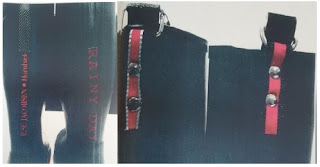 In its ruling, the Supreme Court found that Ilse Jacobsen's rubber boots did not meet the criterion of originality, and therefore did not qualify for copyright protection as a work of applied art. This was based on an interpretation of the Cofemel judgment where the Supreme Court in this GuestKat's view turned things upside down. In the grounds and with reference to Cofemel the court stated that "…it is not sufficient in order to qualify as a work that the said designs beside their technical purposes provide a specific and characteristic effect from an aesthetic view…" (my emphasis). Furthermore, the court stressed that the fact that the rubber boot as a whole by the appointed experts was considered as an expression of creative ability on grounds of free and creative choices, and thus an expression of an independent creative process, did not affect the assessment.

This GuestKat is sceptical regarding the specific use of the Cofemel decision. The Supreme Court stated in the grounds that the direct outcome of the Cofemel decision was that the said designs (jeans and T-shirts) were not protected by copyright. As readers of the IPKat are aware, Cofemel concerned the compliance of Portuguese law with Directive 2001/29. The question was whether the Directive precluded a national legislation from "conferring protection, under copyright, to designs such as the clothing designs at issue in the main proceedings, on the ground that, over and above their practical purpose, they generate a specific, aesthetically significant visual effect." The CJEU stated that even though aesthetic considerations play a part in the creative activity, it is not possible to lay down provisions based on said considerations in order to conclude whether the design constitutes an intellectual creation reflecting the freedom of choice and personality of the author. Thus, the Portuguese Code was not compliant with the Directive.

From the copyright Directives we know that originality is defined as "the author's own intellectual creation" and that "no other criteria shall be applied to determine the eligibility for protection." As for the scope of protection, we know from Painer that copyright protection must "be given a broad interpretation", and that "nothing in Directive 2001/29 or in any other directive applicable in this field supports the view that the extent of such protection should depend on possible differences in the degree of creative freedom in the production of various categories of works."

There seems to be a growing convergence towards a standard based on "creative choices", and according to case law from the CJEU, it seems that originality is a generally harmonized EU-wide term covering all kinds of works, including functional and mass-produced industrial products. In the words of PermaKat Eleonora Rosati, "whilst legislative initiatives have been limited, the CJEU has been acting proactively, establishing through its decisional practice the de facto harmonization of an important principle of copyright: the originality requirement."

The Cofemel decision has so far been a clear confirmation of this. The same goes for the brand new CJEU decision in Brompton Bicycle which apparently also is at variance with the Danish Supreme Court's decision. The CJEU found that "the condition of originality may be eligible for copyright protection, even if its realisation has been dictated by technical considerations, provided that its being so dictated has not prevented the author from reflecting his personality in that subject matter, as an expression of free and creative choices." Further, it was stated that copyright protection also "applies to a product whose shape is, at least in part, necessary to obtain a technical result, where that product is an original work resulting from intellectual creation, in that, through that shape, its author expresses his creative ability in an original manner by making free and creative choices in such a way that that shape reflects his personality […]".

With regard to the ruling’s perspective on the Danish Marketing Practices Act this GuestKat also expresses scepticism. The Supreme Court found that the soles, from an overall assessment, were the most characteristic design feature of Ilse Jacobsen's rubber boots, despite of the lace closing. As the VRS-boots were primarily designed for practical use, they did not comprise of the same design feature as the soles of Ilse Jacobsen's boots, and therefore did not constitute a violation of the Danish Marketing Practices Act. It has been the existing practice that the evaluation of infringement of subjects protected under the scope of the Danish Marketing Practices Act is based on an overall assessment of all characteristics of the subject matter. Therefore, it is noteworthy that the Supreme Court based its decision of violation solely on this however most characteristic feature, the sole, and ignored the fact that all other design features were reproduced in the VRS-boots.

[Guest Post] These boots are made for walking...and not for copyright protection

Reviewed by Alex Woolgar on Sunday, June 28, 2020 Rating: 5
The IPKat licenses the use of its blog posts under a Creative Commons Attribution-Non Commercial Licence.