Léon Dijkman Friday, November 20, 2020 - #IPKat, access to healthcare, Amaka Vanni, Brazil, india, Léon Dijkman, nigeria, Novartis v. Union of India, Patent Games in the Global South, right to health, TRIPs, TWAIL
On this Kat's night stand during the long, locked-down nights in Florence was Amaka Vanni's monograph Patent Games in the Global South: Pharmaceutical Patent Law-Making in Brazil, India and Nigeria (Hart 2020). Vanni is not just a legal scholar, but also a documentary filmmaker—and it shows in her writing. The from-the-ground-up account of pharmaceutical patents in Brazil, India and Nigeria she offers is timely and perceptive, and like a good documentary, it manages to be both objective and intimate.

Vanni's work comes at a time when structural racism and inequality are – at long last – being discussed in earnest [see Katpost here]. Feelings of hopelessness and defeat may all too easily take hold of us when considering the gross injustices perpetrated against former colonies and the echoes they carry still today. At the time of writing, atrocities are being committed by the government of Vanni's home country, Nigeria, against peaceful protesters: once again, it seems that the world stands by idly.

Patent Games in the Global South shows that, far from being insulated from these perverse relations of power, intellectual property [IP] laws can be tools for perpetuating colonial dominance at the expense of local populations. The strength of the book is that it tells us there is hope, and Vanni's meticulous research may yet lead the way towards a more equitable system of IP in non-Western jurisdictions.

The book consists of four main parts: a theoretical background and three chapters devoted to Brazil, India and Nigeria. In each of these chapters, Vanni traces the historical roots of the country's patent law, examines how the current-day law impacts the population's access to healthcare and the involvement of civil society and other non-state actors in the pharmaceutical patent system. The overall inquiry is how each country managed to – or missed opportunities to – exploit flexibilities in the TRIPs agreement to safeguard its population's access to heath rights. The book's most interesting insights are based on field work conducted by Vanni in all three countries over the course of two years. 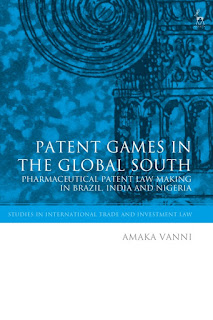 Vanni emphasizes repeatedly that she identifies with a school of thought known as Third-World Approaches to International Law [TWAIL]. She employs a 'Twailian lens' for "contextualising, historicising, mapping and analysing patent law regime and reforms in the countries under study", in hopes of providing "a starting point from which to begin the process of revolutionary reimagination and reordering" [37].

The book cites a recent chapter by James Thuo Gathii that is helpful in better understanding the TWAIL research project [here]. To be honest, though, I am still not convinced. To be sure, the project's goals are important: exposing implicit biases and hidden power structures is crucial to foster the type of open and inclusive debate that TWAIL scholars strive for. But I am not persuaded that it is a 'methodology' as Vanni would have it, instead of advocacy, legitimate and necessary though it may be.

The distinction matters, because framing TWAIL as a methodology exposes it to the very criticism it levels at international IP norms, i.e. that their ostensible neutrality obfuscates a clear agenda. Why not just come out as a critic of these norms on its own right? Vanni's mastery of the subject is such that no appeals to a broader movement are necessary to make her arguments persuasive.

If anything, applying the same 'Twailian lens' to all case studies exposes the book to a weakness of TWAIL that Vanni herself recognizes, i.e. that "TWAIL overlooks the asymmetries between and within the Third World" [52]. The chapter on Nigeria illustrates the point: Vanni shows that this country's local conditions (history, industry, civil society) differ significantly from those in Brasil and India and that this is reflected in how the Nigerian patent system currently functions. In light of these differences, it seems oddly reductionist to assume that Brasil, India and Nigeria are all allies in a uniform struggle against Western IP norms. Rather, as Vanni's careful case studies show, each country is fighting its own fight, and TWAIL may obscure the specifics of those fights by absorbing them in a single movement.

The heart of the book are three case studies demonstrating the way that TRIPs' flexibilities can be utilized to remove or lower patent-related obstacles to access to healthcare for the local population. All three countries were opposed to inclusion of IP provisions in TRIPs and all share the heritage of colonial patent laws which served not to foster domestic innovation, but to further strengthen the colonial power's grip on the country's economy. However, the patent laws of these countries have since developed differently. The key take-aways are as follows:
How can these differences be explained? Vanni attributes them primarily to the presence, in the case of Brazil and India, or absence, in the case of Nigeria, of a local industry and concomitant civil society groups that exert influence over local lawmakers to deploy a patent strategy to serve the country's interest. In that respect and several others, "Nigeria has something to learn from these countries" [209].

Perhaps other countries might be a source of inspiration, too. England, in particular, comes to mind. Until 1977, the Patents Act contained a provision that allowed any interested person to apply for a compulsory license to a patent in respect of a substance capable of being used as food or medicine; the license would be granted unless it appeared to the comptroller of patents that there were "good reasons for refusing the application." And recently, English courts have spearheaded limitation of patent exclusivity to safeguard patient interests, at least in cases where patients would immediately be deprived of life-saving drugs [here and here]. Here, too, a truly global exchange could improve patent laws on both sides of the North-South divide.

Patent Games in the Global South is an important book because it provides empirical support to voices questioning the wisdom and equity of imposing Western-style IP regimes in developing countries [the argument is well summarized by Keith Maskus in this chapter, unfortunately not available open acces]. What is more, it analyses what is needed to improve the situation, and gives concrete examples of how TRIPs flexibilities might be operationalized to best serve a country's interests. There is much more I could say about this book, but I hope to have made clear that it is an impressive achievement that no scholar or policy maker in the area of patent law and access to health can afford to overlook.

Reviewed by Léon Dijkman on Friday, November 20, 2020 Rating: 5
The IPKat licenses the use of its blog posts under a Creative Commons Attribution-Non Commercial Licence.