Two Arnolds for the price of one (part 2)

The second (and final) part of our series of Court of Appeal judgments in breach of confidence cases concerns The Racing Partnership Limited and Ors v Sports Information Services Limited [2020] EWCA Civ 1300.

The dispute was factually complex, and the judge at first instance (Zacaroli J) really had the bit between his teeth in hearing and ruling on several causes of action: infringement of copyright and database right, as well as breach of contract, misuse of confidential information and the tort of conspiracy to injure by unlawful means. The claimant ("TRP") first succeeded in its claim for misuse of confidential information, but failed in all other claims. One of several defendants in the claim ("SIS") appealed, and TRP cross-appealed against dismissal of its claim for unlawful means conspiracy.

The judgment is long (by Court of Appeal standards) and highly detailed [heavy-going?], and therefore not perfectly suited to a comprehensive summary in blog form. The full judgment is definitely worth reading if you have time, for its detailed analysis of the laws of misuse of confidential information and unlawful means conspiracy as they respectively stand. With that sort-of-disclaimer out of the way, let's get ready for the off.

Since 1 January 2017, TRP has had an agreement with Arena, the owner of six horse racecourses, allowing TRP exclusively to collect and distribute certain data. The data fell into two broad categories: (i) betting prices offered by bookmakers located at the racecourses ("Betting Shows"); and (ii) certain data specific to the racecourse on the day of the race e.g. weather and course conditions, changes to the runners and jockeys, start times and results ("Raceday Data"). Both categories are commercially valuable: Betting Shows enable off-course bookmakers to offer up-to-date odds; Raceday Data enables such bookmakers to take bets right up to the start of a race, and to pay out winnings quickly and accurately after the race. It would be possible for members of the public to collect the relevant data by attending Arena racecourses (and some of the data is broadcasted on television, albeit with a slight delay). Arena, to protect its and its exclusive licensee's interests in data collected at Arena racecourses, imposes restrictions on race attendees via its standard T&Cs of entry (published on its website, displayed at entrances to its courses and incorporated into various contracts e.g. via the purchase of tickets).

Prior to 1 January 2017, SIS was Arena's exclusive licensee, instead of TRP. Following the end of this commercial relationship with Arena, SIS began to collect the relevant data from other sources. SIS collected Betting Shows from sources including the websites of off-course bookmakers Betfair and Betdaq, conduct which SIS admitted was knowingly in breach of the relevant T&Cs. Raceday Data was collected from "the Tote", a private company that was originally established by the Racecourses Betting Act 1928 and which therefore had an approved presence at the Arena racecourses. The Tote is authorised to collect and distribute data for the purpose of  a form of betting known as "pool betting", but the data collected by the Tote and provided to SIS went beyond the data necessary for the purpose of pool betting. SIS provided the relevant data to other off-course bookmakers, Ladbrokes and Betfred (which are companies related to SIS), to enable them to resist signing up a data supply agreement with TRP. SIS did not challenge Zacaroli J's finding that SIS had combined with these other companies in relation to the supply of Betting Shows and Raceday Data.

Both the judge at first instance and the Court of Appeal found that the Arena T&Cs did not apply to the Tote because the Tote's presence at the Arena courses came from a legacy right, and did not depend on offer/acceptance of such T&Cs. The Tote was therefore a trespasser to the extent that it had exceeded the implied scope of its right to be present at the Arena courses (i.e. to collect data for pool betting purposes) and - as against SIS - TRP was left with claims in equity (misuse of confidential information) and tort (unlawful means conspiracy).

Arnold LJ, who concluded that SIS misused TRP's confidential information, was therefore overruled by his colleagues in this respect. Although the court's analysis regarding unlawful means conspiracy is comprehensive and fascinating, the points that are most likely to be of interest to IP lawyers relate to TRP's claim for misuse of confidential information:

SIS won the battle on misuse of confidential information, but lost the war. TRP succeeded with its claim for unlawful means conspiracy (insofar as such means constituted a breach of confidence and/or breach of the other bookmakers' website terms and conditions).

Lewison LJ's focus on the very legitimate policy concern of efficiency and legal predictability in commercial contracting (with which Phillips LJ agreed) perhaps short-circuited the three-step analysis of misuse of confidential information with which IP lawyers are familiar. Due to the manner in which TRP's case was pleaded and the lack of specific findings at first instance as to the data (or specific combination of data) that was confidential, the judge had good reason not to grapple with whether some or all of publicly-available the Raceday Data was nevertheless confidential. His reluctance to do so (in contrast to Arnold LJ's approach), however, seems to have contributed to a conclusion which this GuestKat finds slightly perplexing. This dispute involved highly specific facts, which could justify a departure from Lewison LJ's general policy concern. To this GuestKat, SIS was odds-on to have misused TRP's confidential information, given that SIS previously paid handsomely for exclusivity in relation to similar categories of information. But the unfancied horse won, simply because SIS received assurances and a warranty from the Tote (the veracity of which SIS was shown to have been sceptical).

Finally, although it is a shame that we did not have the opportunity to hear the court's views on whether copyright may subsist in TRP's Betting Shows, the discussion in the first instance judgment suggests to this GuestKat that TRP was wise to leave this claim as an also-ran (ditto the alleged infringement of its sui generis database right in a corresponding database). 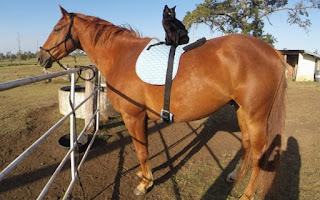 Fancied in the 2.30 at Newmarket

Two Arnolds for the price of one (part 2)

Reviewed by Alex Woolgar on Tuesday, November 17, 2020 Rating: 5
The IPKat licenses the use of its blog posts under a Creative Commons Attribution-Non Commercial Licence.