Tian Lu Tuesday, November 22, 2016 - #unfair competition, CCLS, EU-China IP forum, IP in commercial perspective, IP key, RUC, trade secrets
This InternKat, as a Chinese blogger, had particular pleasure in attending the 2nd EU-China IP Forum in London (Nov. 8th) organized by IP Key and the Centre for Commercial Law Studies (CCLS), Queen Mary University of London (QMUL), with support from Renmin University of China (RUC). With a cast of stellar speakers from academic, judicial, government and private practice backgrounds, a full house was in attendance with over 150 people in the audience. 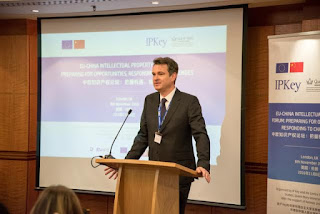 After a warm welcome to all the participants, Prof. Duncan Matthews (CCLS, QMUL) who was also one of the key organizers of this forum, opened the agenda. Prof. Bill Spence (Vice Principal for Research, QMUL) then noted CCLS’s all-along characteristic of “reach out all around the world”, in which collaboration with China was a very important part. Several IP related activities that CCLS had recently taken in China were highlighted, including the 1st EU-China Forum at the Suzhou campus of RUC (see report here), the joint research project with the IP Academy of RUC, and the training programs cooperated with SIPO.

The Right Honourable Lord Justice Kitchin (Royal Courts of Justice) welcomed the delegation and reiterated the aim of this Forum: to address how similar legal problems were dealt with in different jurisdictions; and to build mutual understanding of how IP systems operated in the EU and China.

Mr. Chen Fuli (Deputy Director General, Treaty and Law Department, MOFCOM) highly praised the successfully bilateral cooperation since 1996. In particular, he marked this forum as “different”, because “it is designed and organized mainly by scholars from both sides” -- it was a big step forward from “government-leading” to “government-supporting” dialogues. He believed that with more that 10 professors from each side to touch on the “very challengeable, front-edged issues”, this west-trip could “definitely deepen our cooperation, enhance mutual understandings, and promote our bilateral trade and investment relations.”

Benoît Lory (Minister Counsellor, IP Attaché at the EU Delegation to China and Mongolia) commented on the necessity of having this “crucial” Forum under current economy tensions and online revolutions -- “these challenges require effective and timely solutions. And the contribution from the academic world will be very beneficial.”

Prof. Alexander von Mühlendahl (Visiting Professor, QMUL; Bardehle Pagenberg, Munich) gave a speech on Trade mark and unfair competition: A German perspective of the current situation in the EU. He covered both the conflicts and overlaps of trade mark law and unfair competition law, and sent the message that the EU as such did not have a complete concept of “what unfair competition law is about” --- the EU’s approach was quite limited, the rest was left to Member States to work out in their own traditions and legal systems. He concluded that IPRs were essential instruments of innovation. The protection of competition against anticompetitive practices as well as against unfair competitive practices were necessary complements to the protection of IPRs. The German experience showed that a proper balance between these various instruments was a requirement for a well-functioning economy.

Mr. John Hull (Visiting Professional Fellow of QMUL) spoke on The EU trade secrets directive -- form over substance. In order to answer “why do we need a new trade secret law in the EU?”, he referred to convincing studies conducted by leading law firms that revealed problematic issues that EU failed to address, including (but not limited to) undefined key terms, and a “patchwork” of enforceability and national legal systems differentiations. In particular, he pointed out employees as the main area of trade secret misappropriation, specifically the undefined differences between an employer’s “trade secret” and an employee’s “know how”, and the difficulties of national systems of employment laws to apply to the new laws.

Prof. Li Yang from Sun Yat-Sen University shared his research findings of FRAND Holdup and Its Solutions in the collaborative project with Japan Patent Office last year. “The research subject was very difficult” -- He explained why FRAND holdup happened and then designed a set of rules to mitigate patent holdup. Meanwhile, he underlined that “Only the royalty negotiated by SEP holders and SEP implementer is truly FRAND.”

Tax lawyer Anne Fairpo (Temple Tax Chambers, London) brought her insights on Taxation of IP and intangibles. Her speech covered 4 parts: IP in the context of BEPS (Base erosion and profit shifting); transactions & the rise of withholding taxes; IP tax incentives: disliked but expanding; and IP issues in VAT and indirect taxes.

Prof. Jiang Wanlai (Ningbo University, China) reminded IP enthusiasts to pay attention to The limitation of IP incentives in economic growth and its solutions by putting it into the overall consideration of the whole society. The IPR system did have the function of encouraging innovation, yet it protected private interest in the first place -- such a protection would not necessarily contribute to the economic growth of society -- at least this was insufficient per se. With comprehensive analyses of the Chinese situations, he concluded that a set of complete and well-functioning legal systems other than IPR protection shall be built together. 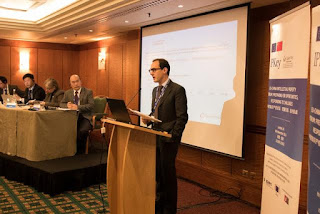 Mr. Emmanuel Gougé (Partner, Pinsent Masons, Paris) addressed a review of Recent trends in IP licensing agreements. Two groups of “new players” of IP business created entities were highlighted, namely the state funded entities and the non-practicing entities. Also, IP business-created practices and behaviors were covered, mainly on open innovations and licensing for exploitation purposes. In the end, he asked the audience: “Is TESLA a true open innovation (as TESLA announced in 2014)?” The answer would be very interesting if you recalled the Phillips CD format stories from 3 or 4 decades ago.

Prof. Xiang Bo (Nankai University, China) addressed The Moral Risks in Service Inventions. Started from the characteristics of service inventions, he pointed out the impossibility of supervision which was caused by the “substantial information asymmetry” between the employer and the employee inventor. Different rules on ownership of service inventions and on remunerations and rewards were reviewed, followed by comments on the Chinese Draft Regulations of Service Inventions -- it may have certain influence on the employer’s moral risks, but the mentioned information asymmetry was not really eliminated; moreover, the marginal costs would be high in obtaining more information, and consequently, the motivating effects of the supervision of the regulatory authorities would be limited.

The Q&A session, “How the Regulations of Service Inventions and relevant policies should be designed by official authorities to better regulate service inventions?” aroused heated discussions. Prof. Liu Chuntian (Dean of the IP Academy, RUC)’s statement was firm and clear: “The answer is very simple.” He declared that the Draft was a product of the planned-economy way of thinking, in which enterprises were considered totally controlled by government. China has now been changed, government is neither the owner of enterprises nor the manager of them. In other words, the Regulation of Service Inventions was an interference in enterprise’s internal management and distribution of property. Moreover, the meaningless regulations added unnecessary burdens to enterprises, increased numbers of governmental employments, and wasted social resources. He concluded, “It is not a matter of how to design the Regulations of Service Inventions -- there should not be such Regulations at all.”

Reviewed by Tian Lu on Tuesday, November 22, 2016 Rating: 5
The IPKat licenses the use of its blog posts under a Creative Commons Attribution-Non Commercial Licence.