The AmeriKat has been preoccupied of late with a treasure trove of litigation fun, as well as other events of perhaps more international significance.  This has meant that she has watched helplessly as interesting patent decisions from the Patents Court and Court of Appeal have been handed down without the time to report on them.  Thankfully, GuestKat Eibhlin Vardy will soon be reporting on the Court of Appeal's decision in Napp v Dr Reddy where the Court upheld Mr Justice Arnold's construction (see the first instance report by wonderful Kat friend Amy Crouch here).  Mr Justice Arnold is on a bit of a winning streak it seems, as last week in Idenix v Gilead [2016] EWCA 1089 the Court of Appeal consisting of Lord Justices Kitchin (giving the lead judgment), Floyd and Patten upheld his decision back in December 2014 (see Kat Darren's post here). He has now been upheld three times in the past six weeks.

What is it about?

Idenix is the patentee of EP (UK) 1 523 489 which claims a family of nucleoside analogues for treating hepatitis C and other Flaviviridae infections (a hep C vaccine - "HCV").  Once the patent granted, Idenix claimed that Gilead infringed the patent by making and selling sofosbuvir, marketed under the brand name Sovaldi.  Gilead denied infringement and counterclaimed for revocation on the grounds of lack of novelty over Gilead's own International Patent Application, lack of inventive step, insufficiency and added matter.

To cut through the verbiage, the AmeriKat has summarized, in tabular format, the position at first instance, as argued on appeal and held by the Court of Appeal in relation to the most interesting arguments (in her opinion) (click to enlarge): 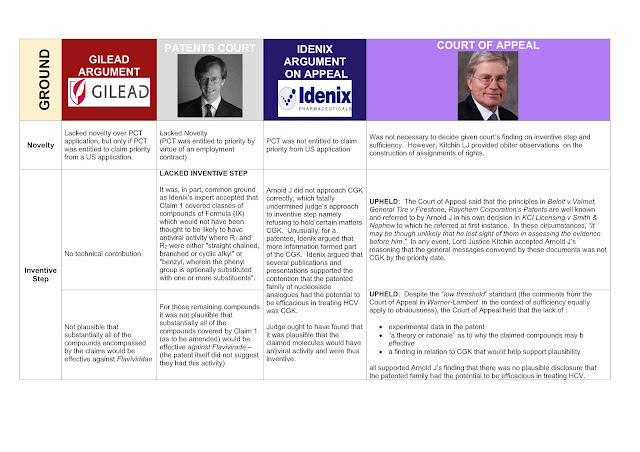 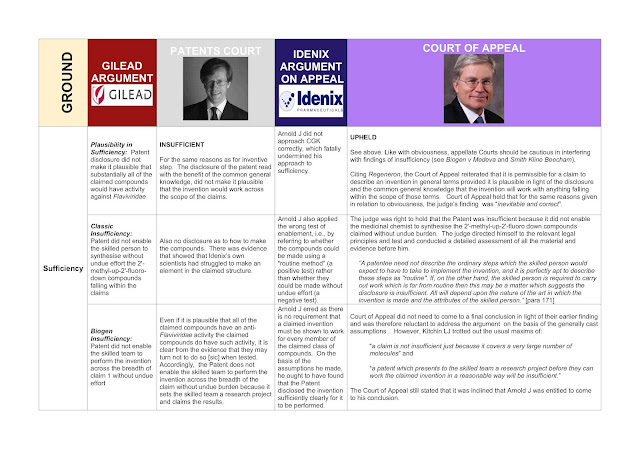 What do you need to know?

Let's get to the point.  There are really only three things you need to practically take away from this decision:

1.  Be careful when proofing up your CGK
2.  Plausibility - a less meddling Court of Appeal?

Its still a low threshold.  However, at paragraph 167, the Court re-affirmed that sufficiency, like obviousness, is subject to a higher threshold for appellate interference of the trial judge's decision:


"But first it is worth restating that a finding of insufficiency, like a finding of obviousness, involves an assessment and the weighing of a number of factors. In these circumstances and absent an error of principle, an appellate court will be very cautious in differing from the judge's evaluation: see SmithKline Beecham's Patent [2006] RPC 323 at [38] per Lord Hoffmann; Halliburton Energy Services Inc v Smith International (North Sea) Ltd and anor [2006] EWCA Civ 1715 at [24] to [25] per Jacob LJ"

3.  Sufficiency - the role of literature searches

The Court of Appeal confirmed that a skilled person may conduct literature searches when going about implementing the invention.  At paragraph 173, Lord Justice Kitchin stated that he had "no doubt":


"that in some circumstances:the skilled person may reasonably be expected to carry out a literature search in order to implement aspects of the teaching of a specification. Whether that is so or whether the fact that such a search is necessary suggests that the teaching of the specification is insufficient will depend upon all the circumstances including the nature and purpose of the search that is required."

It may be the fervor of the past week that has the AmeriKat slightly distracted, but is she starting to detect a discernible trend in recent Court of Appeal decisions that the Court is becoming increasingly reluctant to interfere with the trial judge's decision in patent cases?   She would like to conduct a poll, but we now all know what good those are...

Reviewed by Annsley Merelle Ward on Monday, November 14, 2016 Rating: 5
The IPKat licenses the use of its blog posts under a Creative Commons Attribution-Non Commercial Licence.