Technology law on the menu in Madrid

The ItechLaw Association held its European conference programme in Madrid on November 9-11. The Association always seems to bring together a varied program, befitting its membership, and this time was no exception. With Madrid's well-known late-night tapas scene as an inspiration, the association served up an stimulating array of piquant programmatic dishes to more than 300 of the world's IP and IT lawyers. Kat friend Jeremy Morton brings a summary of these events.

"For those who were able to tear themselves away from that morning's U.S. election results, the three-day programme kicked off with committee

meetings ranging from Intellectual Property to Cybercrime. The Disputes Committee received a preview from Pinsent Masons' David McIlwaine of his firm's international survey on resolution of TMT disputes, conducted with Queen Mary University of London. IP was the highest category of disputes encountered in practice, with respondents also anticipating data protection and data security issues in the future. The committee members noted that the choice of arbitrators and mediators is a significant challenge. Elsewhere, the Interactive Entertainment and Media Committee discussed issues in augmented reality and the perceived need for US judges to have access to training in new technologies. Meanwhile, the Intellectual Property Committee travelled from India to Indianapolis with bite-sized presentations from N.S. Nappinai of Mumbai ('Jurisdictional Hurdles in Enforcing IP') and Kevin Erdman of Brannon, Sowers & Cracraft, who explained the US trend towards rejecting software patents for abstractness. Kevin noted that three new decisions look like reversing the trend, including McRO, which concerned lip-synching techniques.

Thursday morning brought us the plenary session and a keynote from IBM's CTO for Spain, who demonstrated a talking 'cognitive' computer system called HAL, sorry I mean Watson. Watson helps humans understand huge quantities of data so that they can "be more right...more often". No one had asked Watson what will happen next in relation to Brexit, so an august panel of experts had to try and answer that instead. Edward Vaizey, Conservative MP and former Minister for Culture, Communications and the Creative Industries, emphasised that Brexit will not be a legal process but a political process. Trade and competition adviser Shanker Singam of the Legatum Institute was clear that the UK would never become a part of the EEA as a means of Brexit. The 90-minute panel was full of optimism although understandably light on legal detail.

Amazon Spain's Ana Buitrago then explained the barriers imposed by brands in selective distribution systems, such as prohibitions on sales via online marketplaces, or requirements for distributors to have some bricks-and-mortar presence. She also discussed uncertainties in determining whether an e-retailer is targeting a particular country, including cases such as Hotel Alpenhof (2010). Added to these difficulties in operating e-commerce sites across borders are practical barriers, such as labelling requirements or differences in plugs and keyboards.

A session on the digital single market saw a heated debate on geo-blocking between Szilvia Szekely of the European Commission and Alfonso Lamadrid of Garrigues, in particular concerning whether content rights are exhausted if contracts do not include geo-blocking clauses. Alfonso argued that if the noted director of rather depressing movies, Ken Loach, couldn't restrict his French fans from downloading his films from Eastern Europe, the value of the rights in France would be so diminished that the films would never be financed in the first place. Commissioner Andrus Ansip was quoted as saying "I hate geo-blocking", and Szilvia discussed the recent sector enquiry on obstacles to cross-border e-commerce, expected to report in Q1 of 2017. 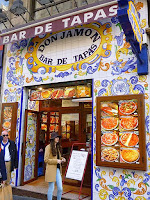 Finally, there were interactive IP workshops on big data and hyperlinking, respectively. IATA's Oana Dolea discussed ownership of technical performance data generated by our cars, and whether the value lay in the data themselves or in algorithms to process them. It seemed that IBM's Watson would have been useful to crack these tricky issues. Meanwhile, Christmas came early for those attending the workshop by Dr S. Klaus of Swiss firm Schellenberg Wittmer, who provided a neat summary of the GS Media decision and earlier cases on linking. Dr Klaus mentioned that a Swedish court has already applied GS Media in a case against a Belgian media company concerning You Tube videos. Unanswered questions, however, include whether banner advertising amounts to financial gain for the purposes of imputed knowledge of illegality, whether assumed knowledge of illegality can be rebutted, and whether there could be liability for linking to third party content on national unfair competition grounds as well as copyright infringement.

There was one further unanswered question: how do the Spanish stay out so late and still make it into the office in the morning?"
Technology law on the menu in Madrid

Reviewed by Neil Wilkof on Friday, November 25, 2016 Rating: 5
The IPKat licenses the use of its blog posts under a Creative Commons Attribution-Non Commercial Licence.