The U.S. presidential election of 1876: votes, cannabis and intellectual property

Let’s step back from the supercharged atmosphere of this week’s electoral events and focus on a curious side-show. First, perhaps for the sixth

time in U.S. electoral history, the winner of the electoral vote did not win the popular vote. Second, several American states were simultaneously holding various ballot initiatives on the legalization of cannabis. This Kat began to wonder: has there ever been a juxtapose between the two in connection with any previous presidential election? Mirabile dictu—the answer is “yes”, the election of 1876. And in this lies a unique tale about Samuel J. Tilden, Tilden's Extract, and the world of intellectual property during that period.

Samuel J. Tilden was the presidential nominee of the Democratic party in 1876, running against the Republican candidate, Rutherford B. Hayes. Tilden won the popular vote over Hayes, but he lost the vote in the Electoral College. It seems that the Electoral Commission, charged with resolving the issue, voted on partisan grounds in favor of Hayes. Popular wisdom also says that Tilden lost the electoral vote as result of an agreement, whereby Democrats agreed to Hayes’s election in exchange for removing all Federal troops from the South, thereby ending the Reconstruction_Era that followed the U.S. Civil War.

OK Kat, I get the idea about the popular and Electoral College votes, but what does this have to do with cannabis? It turns out that the Tilden family was widely identified at that time with Tilden & Company, which manufactured and sold a medical cannabis extract (described as a “pure medicinal extract”) under the company name. The product was popularly known as “Tilden's Extract”, and it was a type of so-called patent medicine (more on that below). Tilden's Extract was described as “cannabis indicia”, being “Indian hemp” (“The true Cannabis Indica is imported from India [and] … is cultivated largely in parts of Europe and Asia.”).

Advertisements for Tilden's Extract characterized it as--

“Phrenic, anæsthetic, anti-spasmodic and hypnotic. Unlike opium, it does not constipate the bowels, lessen the appetite, create nausea, produce dryness of the tongue, check pulmonary secretions or produce headache. Used with success in hysteria, chorea, gout, neuralgia, acute and sub-acute rheumatism, tetanus, hydrophobia and the like.”

The origin of Tilden's Extract was a formulation made by a well-known (in his time) English botanist named James Edward Smith, who inter alia had founded the Linnean Society of London. It is not clear when Smith arrived at the formulation for Tilden's Extract, but it seems to have been at the end of the 18th or beginning of the 19th century. Nor could this Kat find any definitive explanation how this formulation reached Tilden & Company. What does seem clear is that, by the time that Tilden & Company begin to manufacture and market the medicinal cannabis product, Smith had no claim of patent rights (or, more likely, he never had any claim of rights).

As noted, Tilden's Extract was a type of “patent medicine” (also called a “nostrum”). This does not mean that these products were necessarily the subject of patent protection (which was almost never the case). Rather, the use of the term derives from a practice in the late 17th century, whereby a “letters patent” was given to certain favored manufacturers to use the fact of royal endorsement in promoting their nostrum, as part of what we call today “advertising” the product. The dubious quality of at least some of these patent medicines led to the term “snake oil”, which was one such patent medicine that was sold at the time.

There is no indication that the quality of Tilden's Extract was suspect. Moreover, the product received a big boost when a 19th century author named Fritz Hugh Ludlow used Tilden's Extract “recreationally”, and published a book, called “The Hasheesh Eater”, about his experiences with the cannabis product. But the more sustained key to the product’s success was in its advertising and branding. As described by Wikipedia—

“Advertisement kept these patent medications in the public eye and gave the belief that no disease was beyond the cure of patent medication. “The medicine man’s key task quickly became not production but sales, the job of persuading ailing citizens to buy his particular brand from among the hundreds offered. Whether unscrupulous or self-deluded, nostrum makers set about this task with cleverness and zeal.”

The development of the branding of the medical cannabis product has been explained as follows:

“The process was so simple that for the first part of the 19th Century "Tincture Cannabis" was the domain of the local apothecary shop. But all of that would soon change. By the late 19th century, Brand-Name drugs slowly began to replace locally (apothecary shop) made products. People really wanted the security and presumed superior quality that only a "Brand-Name" could give them. As an example, the Cannabis Tincture used by the great American writer Fitz Hugh Ludlow (who wrote much-quoted articles about his experiences with Cannabis) was a brand name product manufactured by Tilden & Company of New Lebanon, New York. Without question, he could have bought a much cheaper, locally made product, but chose instead to use a well- known Brand-Name product.’

“… the compounders of such nostrums used a primitive version of branding to distinguish their products from the crowd of their competitors.”

Two thoughts come from this consideration of Tilden's Extract.

First, the family business did not appear to have affected Tilden’s political career. Indeed, it is possible that this name recognition might 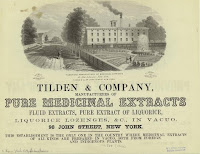 have even helped him. One wonders how a modern-day candidate, no matter how legal the activities related to medicinal cannabis have become in some jurisdictions, would fare at the national level with a company background such as that of Tilden’s family.

Second, greater IP attention should be given to these early attempts at branding patent medicines. Indeed, some of them, such as Luden’s lozenges, dating back to the 1870’s, are still on the market.

The upshot is that, even in the context of the U.S. presidential election of 1876, there was a IP back story worthy of mention.

The U.S. presidential election of 1876: votes, cannabis and intellectual property

Reviewed by Neil Wilkof on Friday, November 11, 2016 Rating: 5
The IPKat licenses the use of its blog posts under a Creative Commons Attribution-Non Commercial Licence.