Okay, Kat readers, what was the biggest news item of last week? Many of you, especially if you follow events in the U.S., will probably point to

the drama over Obamacare. Yes, indeed, that was an exciting event. But the really big news item came from Atlanta, Georgia, the home of the Coca-Cola Company, which, on July 26th, issued a press release, which began as follows--


“Since its 2005 introduction, Coca-Cola Zero™ has refreshed hundreds of millions of fans across America with its real Coca-Cola taste and zero calories. From its U.S. introduction into the Coca-Cola® trademark brand portfolio to its global expansion, the brand is sold in nearly 160 countries around the world.

Now, through in-house innovation and extensive market testing, Coca-Cola Zero is getting a new name, new look and even more delicious taste. The no-calorie fan favorite will deliver an even better-tasting recipe and now be called Coca-Cola Zero Sugar.”

Accompanying the new product will be new a packaging design, highlighting the “iconic red Cola-Cola disc”, which will be set against the black background that has come to be identified with Coca-Cola Zero. Also, the words “Zero Sugar” will be prominently featured, just to make sure that consumers know that the drink does not contain any, but any, sugar. The overall goal of the new design is “that [it] looks more like Coca-Cola” [Merpel asks what exactly this is supposed to mean.]

More generally, this move by Coca-Cola raises some questions for this Kat. Remember, the ultimate goal here is presumably to sell more of the Coca-Cola Zero Sugar drink than the zero-calorie product sold under the Coca-Cola Zero mark. Start with this Kat’s own lair. When I described for Mrs. Kat what Coca-Cola was planning to do, her response was: “What’s the difference whether it is called Coca-Cola Zero or Coca- Cola Zero Sugar?” Here, the competition is between Coca-Cola’s no calorie product and those of others. Her preference for years has been the Coca-Cola product, which means that unless she dislikes the taste of the new product, she will remain a customer, whatever they call it. For her, the move will not result in additional sales for the company, but the company seems confident enough that she will not abandon the Coca-Cola product in this product line.

The additional sales would seem to come, if at all, from customers who identify with the Coca-Cola brand first and foremost on the basis of taste. Another member of this Kat’s lair simply will not give up the full-calorie version of the Coca-Cola product, refusing to drink Coca-Cola Zero “because of the taste”. One result of this position is that he limits his intake of regular Coca-Cola because of the calories involved, which means that he drinks less of the Coca- Cola product than he might if calories were not an issue. 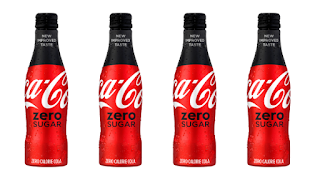 Enters Coca-Cola Zero Sugar. If Coca-Cola can convince this Kat’s family member that the new drink tastes exactly, or nearly so, like regular Coca-Cola, he might be tempted to switch (or at least give it a try). If he likes Coca-Cola Zero Sugar, he may well increase the volume of his purchases of Coca-Cola soft drinks. In this case, the move by Coca-Cola will result in increased sales.

This might also explain the change from “Zero” to “Zero Sugar”. Since the launch of Coca-Cola Zero, there has been a legal question whether the word “Zero” has any distinctive power in the trademark sense. Courts and tribunals have differed on this point, some holding “yes”, others “no”. “Zero Sugar” seems clearly in the camp of being unequivocally descriptive, which is not good from the trademark perspective. On the other hand, it reinforces, on a factual level, for people like this Kat’s family member, that the product is indeed sugar-free. Drink as much as you want; after all, it tastes like “the real thing” and there are no calories to count.

Reviewed by Neil Wilkof on Saturday, July 29, 2017 Rating: 5
The IPKat licenses the use of its blog posts under a Creative Commons Attribution-Non Commercial Licence.