Tritton on Intellectual Property in Europe was first published in 1996, and is now in its fifth edition. It is considered the leading authority on intellectual property law and rights protection in Europe, providing comprehensive and detailed analysis of patents, trademarks, copyright, designs, and plant varieties, as well as intellectual property and free movement of goods, IP and technology transfer licenses, horizontal agreements and vertical agreements, competition law, Euro-defences in IP actions, Procedures and remedies for enforcement of IPRs, Border controls and Jurisdiction. 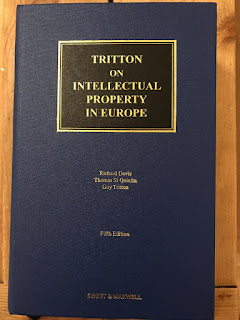 The authors; Richard Davis, Tom St Quintin and Guy Tritton, are all Barristers at Hogarth Chambers, a specialist intellectual property chambers, take a “top down” approach in examining intellectual property protection in Europe, considering the IPRs created by EU Law. This analysis is not considered in isolation, instead is framed within the relevant international conventions. In the preface Professor Anselm Kamperman Sanders of Maastrict Univeristy describes the book as:

Tritton set the bar for all comprehensive titles on intellectual property in the common market. Now in it's fifth edition, it still towers above other titles in this field.

The book is presented in 17 lengthy chapters, organised in 4 main sections. The first section addresses the existence, nature and extent of IPRs in Europe, including full analysis of the international and EU laws in the areas of patents, trade mark, copyright, design and plant variety rights.

The second section analyses the free movement of goods and services provisions and the competition provisions of the Treaty of Functioning of the European Union on the enforcement and licensing of IP.

The third section concerns enforcement of IPRs, including practice and procedure from customs seizures or court action. This section also considers Euro-defences – where the defence does not arise from the IPR legislation itself.

The final section examines issues of jurisdiction and enforcement of judgements in the context of IP litigation in Europe.

The publisher describes the book as having these key features:
Updates to the fifth edition include:

The extensive and exhaustive coverage of all such a broad range of IP makes this book essential reading for all intellectual property practitioners. It will also appeal to those working, studying or researching in the field of IP.

Reviewed by Hayleigh Bosher on Tuesday, February 12, 2019 Rating: 5
The IPKat licenses the use of its blog posts under a Creative Commons Attribution-Non Commercial Licence.