Peter Ling Wednesday, February 06, 2019 - acquired distinctiveness, inherent distinctiveness, trademark, use in relation to goods and services
Many city dwellers who have ventured onto the narrow and winding roads in the Swiss Alps (including this Kat) are rightly amazed by the driving skills of those holding the steering wheels of the large yellow coaches operated by a subsidiary of the Swiss Post. The PostBus (as the firm refers to itself in English) is such a fixture of Swiss culture that it receives special treatment in federal traffic regulations (you must yield to the PostBus and follow the instructions of the driver if the road is too narrow to intersect).
Unsurprisingly, many features of the PostBus, such as its three-tone horn (used to warn other drivers of its imminent arrival and inspired from Rossini’s Overture from William Tell, what else) and the color yellow (you can read here and here about another color used as a distinctive sign for public transportation in a somewhat warmer country) are protected by various trademarks. 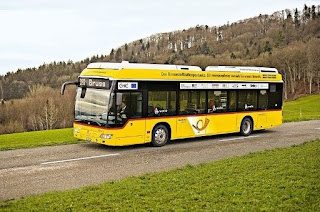 The question recently put before the Swiss Federal Administrative Court was whether the word “POSTAUTO”, the German version of “PostBus”, can be registered as a trademark for a variety of goods and services. After back and forth prosecution, the Federal Institute of Intellectual Property (FIIP) accepted the sign for some goods and services, based on acquired distinctiveness. This included in particular the transport of persons and goods in class 39, arguably the most well-known service carried out using the sign “POSTAUTO”.
This was not enough for the Swiss Post (the trademark owner), which appealed to the Federal Administrative Court, seeking to secure registration for those goods and services refused by the FIIP, inter alia, vehicles, printed material, toys (in particular model coaches), tour operating, carsharing, carpooling and educational services. To prevail, the appellant had to show either that “POSTAUTO” was inherently distinctive or that the sign had acquired distinctiveness through its use with the relevant public.

“POSTAUTO” is Not Inherently Distinctive
The Court ruled that the sign lacked inherent distinctiveness for all of the goods and services under the appeal. As “post” is generally associated with delivering mail and packages and “auto” is understood as a reference to “automobile”, this outcome was hardly surprising with regard to vehicles, toys and tour operating services.
As the Court admitted however, one needs “somewhat more imagination” to associate the sign with magnetic and optical media (class 9) or printed material (class 16). Since the decision to purchase these goods is primarily based on the content of the media or printed material (think CD-ROM or magazine), “POSTAUTO” will nonetheless be understood by the public referring to the relevant theme of the media or printed material and thus lack distinctiveness.

Acquired Distinctiveness: Cannot See the Forest for the Trees?
A sign is considered to have acquired distinctiveness if it is understood by a considerable proportion of the relevant public as referring to certain products or services of one specific company, although it is not required that the public identifies the actual company. The FIIP had argued that the evidence filed by the trade mark owner lacked a clear nexus with the specific goods and services for which the appellant was claiming acquired distinctiveness. The Court disagreed. The evidence filed should have been considered in the context of the continuous and intensive use of the sign over several decades in all linguistic regions of Switzerland.
Moreover, several goods or services that are “thematically closely related” are often provided by one single entity. Whenever the relevant public uses a “core service” (for which the sign has acquired distinctiveness), it also expects the provision from the same source of auxiliary services closely related to the core service. In the case at hand, the operator of public transportation services is expected to issue timetables, travel brochures, tickets and travel cards, i.e. “printed material” in class 16. The same is true of magnetic or optical media in class 9, such as travel apps, ticket machines and display panels.
Even though the evidence filed does not directly prove trademark use for these goods, the Court considers such use to be “notorious”, i.e. known to the Court without need for further evidence. Due to its “notable and long-standing reputation”, “POSTAUTO” has become a widely-known term. Such use has broadened the perception of the trade mark as a reference to goods and services from the same source beyond merely providing coaches for transporting people.
The same is true for the claimed toys, in particular PostBus models (class 28) and for tour operating and educational services (such as a coach driving school; class 39). In the Court’s opinion, not only is it common for public transportation service providers to offer such goods and services, but the relevant public actually expects the owner of a trademark for the transport of people to do so.
The same cannot be said of “vehicles” in class 12 or the “operation of carsharing or carpooling services” in class 39. The trade mark owner is not currently selling, nor is it offering carsharing or carpooling, and it would be unexpected for a public transportation company to do so. “POSTAUTO” has therefore not acquired distinctiveness for these goods and services.

Reviewed by Peter Ling on Wednesday, February 06, 2019 Rating: 5
The IPKat licenses the use of its blog posts under a Creative Commons Attribution-Non Commercial Licence.