Hayleigh Bosher Friday, February 15, 2019 - celebrity image, celebrity photos, celebrity rights, copyright, copyright in photographs, Copyright infringement, Hayleigh Bosher, social media
Social media is a real spanner in the IP works, since it’s all about sharing content that IP is in the business of restricting. Social media platforms were crowned a haven for counterfeited goods by the UK IPO report Share and Share Alike, and they can also cause havoc for copyright holders as their content is shared without permission, not to mention the dubious terms and conditions! Recently GiGi Hadid has found herself in the hot seat for sharing images on Instagram, and not for the first time. Here’s the latest: 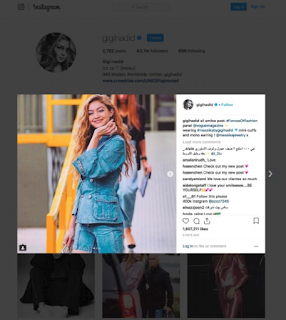 Hadid manages her own Instagram account, which has over 44 million followers worldwide. On 12 October 2018, she posted a picture of herself to her Instagram account. The copyright holder of the image in question, which was captured on October 11, 2018 in New York City is Xclusive (a photo agency that represents over 40 photographers worldwide).

Xclusive have now brought a civil complaint against Hadid in the United States District Court for the Eastern District of New York seeking a trial by jury and damages for copyright infringement under the copyright laws of the United States (17 U.S.C. § 101). In the claim Xclusive argue that Hadid’s Instagram account includes at least fifty (50) examples of uncredited photographs of Hadid in public, at press events, or on the runway, posted by Hadid without license or permission from the copyright holder. The claim states that Xclusive believes these acts of infringement are willful and intentional, in disregard of and with indifference to the rights of copyright holders.

This is not the first time this has happened. In 2017, Hadid removed a watermark and posted a photo of herself on her Instagram, which was taken by photographer Peter Cepeda. Despite numerous demands to Hadid to remove the infringing photo, she refused to remove the image, which received 1.2 million likes on Instagram. Cepeda had licensed the photo to The Daily Mail and TMZ but after Hadid’s post, the photo was then used by several other publications, crediting Hadid with no mention of Cepeda. The photographer brought a claim against Hadid [Peter Cepeda v. Jelena Noura “Gigi” Hadid and IMG Worldwide, Inc ., 1:17-cv-00989-LMB-MSN (E.D. Va.) (2017)] seeking compensation for damages, including any profits realised by Hadid and/or IMG attributable to the photo. However, the parties settled the matter out of court.

A similar situation occurred when Khloe Kardashian posted a photo of herself on her Instagram, also owned by Xposure Photos in 2017. Xposure filed the complaint in the U.S. District Court for the Central District of California, stating that posted the photograph along with the caption ‘going for a meal at David Grutman’s Miami restaurant, Komodo’ in September 2014, without a licence from the copyright holder. The Photograph was taken by Manual Munoz and licensed for limited use to The Daily Mail, which published it on 13th September 2016 together with a copyright notice and watermark. The following day the photo was posted on Kardashian’s Instagram account, with the watermark removed. Similarly, according to a March 2018 mediation report, the case was "completely settled."

These previous cases didn’t deter Hadid from continuing to post photos of herself on her social media platforms. She even posted this argument about the situation on her Instagram: “Yesterday I heard from my management that I am being ‘legally pursued’ for my last (now deleted) Instagram post...sue me for a photo I FOUND ON TWITTER (with no photographer name on the image) for a photo he has already been paid for..."

She goes on to say:

To all the fan accounts being taken down and being sued themselves...to the photographers... demanding money from young fans...is just wrong.

This raises the broader issues of the confusion and tension of copyright uses on social media, celebrities right to control their image as well as the classic tensions between paparazzi and privacy. Whilst the US recognises some personality rights, consent is not required for the “use of a name, voice, signature, photograph or likeness in connection with any news, public affairs, or sports broadcast or account, or any political campaign”. Some might consider it a fair trade-off for living the life of a celebrity. In the social media and influencer age, it is more common and lucrative than ever to be using one’s own image for remuneration.

From a copyright perspective, we understand that the photographer is the rightful owner of an image that they create. In addition, it is clear that the value of the image is lost when posted by the celebrity, who also benefits financially from the images they share on social media. However, there are limitations, for example it is still possible to infringe a trade mark and privacy rights in a photograph.


My prediction is that this will be another case that will settle out of court, following the pattern of other recent cases, which is a shame because it would be interesting to see how the court deals with these issues!

Reviewed by Hayleigh Bosher on Friday, February 15, 2019 Rating: 5
The IPKat licenses the use of its blog posts under a Creative Commons Attribution-Non Commercial Licence.