Cecilia Sbrolli Wednesday, February 27, 2019 - barilla, Community design, design patents, giovanni rana, giugiaro, marille, traditional knowledge, voiello
Did you know that there is a World Pasta Day? Well, there is and it is on 25 October if you wish to feast in 8 months' time. To celebrate a little late, or early (but it is never really too late to celebrate pasta, isn't it?) there is some IP-related pasta news.

A few months ago Giovanni Rana and Barilla, two renowned pasta manufacturers (fresh and dry respectively), obtained design patent rights in the US for pasta shapes.

Design patents, as set forth in 35 USC § 171, provide protection for a new, original ornamental design of an article of manufacture - but not for its underlying functionality. Design patents enjoy protection for 15 years from the date when they are granted (if filed after 13 May 2015; before this date the protection is 14 years) and they do not require formal renewal. What is the difference between design patents and utility patents? As the USPTO puts it (and for more information on the difference between the two types of patents) "In general terms, a “utility patent” protects the way an article is used and works (35 U.S.C. 101), while a “design patent” protects the way an article looks (35 U.S.C. 171)."

Now, when it comes to pasta, I would normally be a bit of a stickler but who can say no to pasta looking like this: 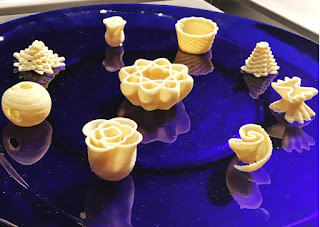 Furthermore, if one wants to get particularly creative, under US Patent law it is also possible to obtain a patent for food recipes as long as the recipe brings a "new and useful process, machine, manufacture, or composition of matter, or any new and useful improvement thereof" (35 U.S.C. 101). Furthermore, the invention has to be also "novel" and "non obvious", according to  35 U.S.C. 102 and 35 U.S.C. 103, respectively. It is then not so easy to create a non-obvious recipe but not impossible!


Barilla had already obtained design rights on these 3-D printed pasta shapes in the EU back in 2016. A design under EU law is defined as 'The appearance of the whole or a part of a product resulting from the features of, in particular, the lines, contours, colours, shape, texture and/or materials of the product itself and/or its ornamentation' (Article 3 of Regulation (EC) no. 6/2002). In the EU it is possible to protect a design by registering it (a so called "Registered Community Design") which will enjoy protection for five years x five. It is however also possible to make the design available to the public without first seeking protection (a so called "Unregistered Community Design"), which will enjoy a one-time protection of three years.

In the past there have been other notable pasta shapes: for instance, in 1983 Voiello, another house name for pasta, patented the Marille, created by designer Giorgetto Giugiaro. This pasta was apparently highly digestible and married well with sauces. Unfortunately it went out of production, one of the reasons being that the design of the pasta apparently made it too difficult to cook evenly.


In any event, Barilla has held the design right on much more common shapes of pasta, such as penne, farfalle and fusilli (which have all lapsed by now). In that case questions of preservation of gastronomic creations and traditional knowledge arise.

Reviewed by Cecilia Sbrolli on Wednesday, February 27, 2019 Rating: 5
The IPKat licenses the use of its blog posts under a Creative Commons Attribution-Non Commercial Licence.