According to the recent Counterfeiting Report from the Global Intellectual Property Center (GIPC) part of the Chamber of Commerce, global counterfeiting remains a 'tremendous and ever increasing global threat'. The report estimated that China alone is the source of more than 70% of global physical trade-related counterfeiting, or $285 billion worth. Physical counterfeiting makes up 12.5% of China’s exports of goods and over 1.5% of its GDP.

The Unitary Patent has been many years in the making, and its future is still not entirely clear. Dr. Ingve Björn Stjerna has published a series of papers on the subject, all of which are available to read along with links to other useful resources here. IPKat readers in particular may be interested in the “expert teams” of the Preparatory Committee, and the immediate implications for SMEs.

CIPA's shining stars will be performing on 5 July at The Borderline in London. You may have heard enough about borders to last you a lifetime recently, but this event promises to be something completely different - a very special night, featuring musical performances from CIPA members, and with profits raised going to Generating Genius, a charity supporting young people from disadvantaged backgrounds in STEM. You can register for the event through the CIPA website, or for non-members, by email. More information is here. 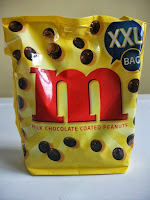 The Svea Court of Appeal has ruled that Mars is not allowed to use its lower case m&m's logo in Sweden, as it is too similar to Mondelez International's Marabou brand (see left). Mars Nordic's corporate affairs director expressed disappointment at the court's decision, telling the press: "we have always believed no confusion exists between the colourful m&m's brand — one of the world's favourite chocolate products — and the Marabou M Peanut Brand." ﻿﻿

Marabou's 'm' branded chocolates have been on sale in Sweden since the 1950s. The m&m brand has existed in the USA since 1941, but took a while to expand into the global market. Swedish website The Local reports that Mondelez (then Kraft) signed an agreement with Mars in 1989 promising not to sell m&m's in Scandinavia. This agreement expired, and in 2009 Mars started selling m&m's in Sweden. It is not clear why it took Kraft/Mondelez so long to challenge Mars' use of the m&m's mark. If this decision is of interest you can read a summary of the decision here. Katfriend Nedim Malovic tells the IPKat that non-Swedish speakers will shortly be able to read about the decision in the Journal of Intellectual Property Law and Practice.

The Wall Street Journal reports that Chinese company Shenzhen Baili won a surprise injunction against sales of Apple's iPhone 6 and iPhone6+ in Beijing based on a design patent for its 100c smartphone. It's difficult to tell at this stage whether the Chinese company is a troll or whether it has a genuine case, but either way, this is an interesting example of what may become an increasingly common sight: Chinese companies using the domestic patent system to successfully attack Western tech giants. The iPhone models in question are still available in Beijing, as the injunction that was issued against their sale was stayed pending an appeal.
Wednesday Whimsies

Reviewed by Nick Smallwood on Wednesday, June 29, 2016 Rating: 5
The IPKat licenses the use of its blog posts under a Creative Commons Attribution-Non Commercial Licence.