"The opinion of Advocate General Szpunar in Simba Toys is unusual.  It is one of the few opinions where an Advocate General (AG) has argued for the reversal of all previous instances - EUIPO Cancellation Division, the Board of Appeals, as well as the General Court - so as to find against the registration of the shape of the Rubik's Cube.   This decision is even more noteworthy as it follows the precedent-setting Lego decision.  In Lego, the EUIPO and General Court held the same view that that the "Lego brick" is dictated by technical function (and thus ineligible for registration), which was supported by the AG and accepted by the CJEU. In Simba Toys, the AG took the opposite view of all three previous decisions.

According to statistics published in 2016 the AG's opinion has significant influence on the final judgment of the CJEU.  The statistics show that the Court follows the same reasoning and gives its judgment based on AG's opinion "only" in approximately 70% of the cases. That is to say it is possible that the CJEU rules contrary to the opinion of the AG, but that is the exception not the rule.  This case is the exception.

This blog post focuses on the technical functionality issue of the opinion and the AG's findings on this point:

Step 1:  Define the function of the product

The first step in assessing technical functionality is to define "the function of the product" that has to be performed by the sign applied for.


"(…) the cubic grid structure gives no indication as to its function, or even if it has any structure, and ‘[i]t is impossible to conclude that it may impart some technical advantage or effect in the domain of three-dimensional puzzles’." (contested decision at [28]).

The General Court, while concurring with the findings of the Board of Appeals, tended to accept the argument of the Appellant (see Appellant's argument in judgment under appeal at [50]) that the function of the product can be construed as follows:


"(…) possible rotating capability, or even any other possibility of moving certain elements of the cube in question, (…) " (judgment under appeal at [54]) 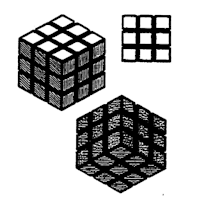 Contrary to the above findings of fact, the AG provided a "new" (broader) definition:


"83. As I understand it, in order to carry out a proper analysis of the functional features of the shape the General Court should have first taken account of the function of the goods concerned, namely the three-dimensional puzzle, that is to say a brain-teaser consisting of a logical arrangement of movable elements. Had the General Court taken account of that function, it could not have rejected the appellant’s claim that the cube in question will be perceived as consisting of movable elements divided by black lines."

"107. That function is confirmed by the well-know (paragraph 28 of the contested decision) features of the represented ‘Rubik’s Cube’ brain-teaser, in which the movable elements, arranged in vertical and horizontal lattices, can be rotated."

Thus, the AG created and relied on a definition of function, which had never been raised and analyzed by the preceding forums. Even if a merged definition of the cited paragraphs of the AG's opinion can be formulated and accepted as prevailing over the General Court's definition of "rotating capability", it must be first be expressis verbis (explicitly mentioned) by the GC and the assessment of functionality (further tests below) must be assessed according to that definition.

After defining the function of the product under assessment of functionality the second step is to identify the essential characteristics of a sign.  The AG's Opinion stated:


" 67. (…) that identification of the essential characteristics of a sign and also the assessment of whether or not they are functional in nature certainly feature among the findings of fact (…)" which cannot be reviewed on appeal, with the exception of a plea alleging distortion of the facts or evidence."

"68. However, establishing the criteria for assessing functionality and the extent of the information to be taken into account is a question of law reviewable on appeal."

Because this finding was not contested by the either of the parties, the AG did not go further.

Step 3:  Assess whether the essential characteristics are functional in nature


"78. Firstly, the General Court, although identifying the essential characteristics of the sign, failed to assess them in the light of the technical function inherent in the goods concerned."


"There is therefore no essential link between (i) such a possible rotating capability, or even any other possibility of moving certain elements of the cube in question (test 1), and (ii) the presence, on the surfaces of that cube, of bold black lines or, a fortiori, of a grid structure of the type set out on the graphic representations of the contested mark. (test 3)" (judgment under appeal at [54]) (emphasis added)

...it is clear that that capability cannot result from the black lines in themselves or, more generally, from the grid structure" (judgment under appeal at [58])"

Therefore, it is difficult to understand on what grounds the AG is alleging that the General Court failed to assess the essential characteristic of the sign or distorted any facts or evidence.

As to the substance of third test the AG found that:


"108. As the appellant correctly points out, the puzzle must, in order to perform that function, represent the shape of a polyhedron assembled from elements consisting of vertical and horizontal columns. "

"109. Consequently, contrary to what was found by the Board of Appeal in paragraph 28 of the contested decision, the essential characteristics of the contested sign — the shape of the cube and the grid structure dividing the vertical and horizontal columns of evenly spaced elements, and the movable parts of the puzzle — are necessary to perform a technical function inherent in the goods concerned."

In elementary geometry, a polyhedron is a solid in three dimensions with flat polygonal faces, straight edges and sharp corners or vertices. (Wikipedia)

The below examples, while are not polyhedron shapes, still perform the possible function of rotating capability or even the completely new definition of function adopted by the AG. Therefore, it seems that the puzzle does not have to, in order to perform that function, represent the shape of a polyhedron. 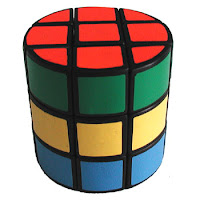 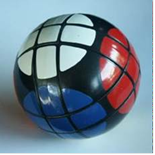 It is difficult to accept that the cube shape (essential characteristic no. 1) is necessary to obtain the technical result.  It plainly is not in light of the above pictures.  In the Lego case all forums found that the overall shape, "the brick shape" (essential characteristics no. 5.) was necessary to obtain the technical result of "brick shape for building; size for children to hold" (Lego at 54.). Such finding most certainly does not apply for the RUBIKS CUBE, since the cubic shape is not necessary to build anything, nor for rotation.

What is more interesting, even if any above defined functions of the product is used to conduct the third step, the cube shape (essential characteristic no. 1) was never examined by any previous instances. That is to say the third test, as a finding of fact, at this stage of the proceedings must have been first performed by the General Court.

It is now for the CJEU to consider whether the state of the proceedings - according to Article 61 of the Statue of the Court of Justice - permits it to give a final judgment. It is unlikely that such a lack of finding of facts by the General Court as set out above would allow the court to render a final judgment."
Advocate General Szpunar considers Rubik's Cube shape mark invalid

Reviewed by Annsley Merelle Ward on Thursday, June 16, 2016 Rating: 5
The IPKat licenses the use of its blog posts under a Creative Commons Attribution-Non Commercial Licence.