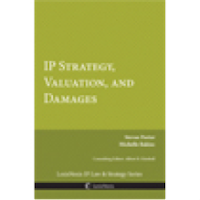 I learned a few things reading this book. One, don’t judge a book by its green cover, and two, the IP valuation world is fascinatingly complex. A new book by Michelle Rakiec and Stevan Porter contains some very interesting insights on the evolving world of IP valuation and damages.

The meat of the book begins in the third chapter, where the authors address the principles of valuation.  Here the authors do an excellent job of laying out the principles of valuation and the variations of market, income and cost models.  Their explanation of binomial models and Monte Carlo methods was clear and not scary. (On a side note, not much appears to have fundamentally changed in valuation since this Kat was a bank-kitten at the beginning of the noughties.)

A chapter on damages presents a methodical, clear process for determining how damages might be assessed in the case of infringement.  There is an in-depth discussion of the Georgia-Pacific factors and some handy flow charts.  The authors discuss how courts may view various damages scenarios. For example, where lost profits may be accepted as a damages valuation method even if the patentee isn’t actually selling -- “lost profits also have been awarded when the patentee lost sales of its product not covered by the patent as a result of infringing use of the patented technology in a competitor’s product.”

The section on strategic management of IP covers a lot more ground than just IP.  It looks at wider issues in business risk and financial decision-making.  It provides four generalised intellectual property strategies: commercialise, license, sell and abandon. The final chapter looks at managerial uses of intellectual property and includes a fascinating discussion on the role of IP in signalling. The authors frame signalling as the use of IP to send market signals about business strategy. Patenting activity sends subtle signals about a company’s intentions and can be used intentionally (‘actively’) to encourage a “beneficial competitive consensus.” Using the example of Apple and Microsoft, they detail how strategic signalling of IP assets thwarted Android’s market expansion. In an example of failed IP-backed market strategy, they examine Procter & Gamble’s attempt to use IP to block competitors from entering the new and profitable at-home teeth whitening market (clearly more popular in the US than elsewhere). The strategy back-fired as competitors worked around P&G’s patents and introduced much cheaper whitening products, driving prices and profits down.

An early chapter on the role of IP in society provides a whirlwind tour of IP; it touches on philosophical and policy debates that are interesting but seem a bit out of place. I was a bit frustrated by the use of American football to illustrate innovation in the absence of incentives. One, I associate football with bad food, and two, it’s not a great example. “Professional football teams also have been known to advance new formations and plays despite the fact that successful innovations can be quickly replicated by opposing teams.”  Surely IP over formations would be the equivalent of IP over chess moves – completely against the spirit of competition.

This book is handy for IP-savvy professionals, particularly US-based, who are not au-fait on the financial machinations of IP as an asset.  I found the non-IP/valuation bits clunky, but the IP discussions insightful and clearly written by experts. Ultimately it does what a book like this should to – enables the IP professional to know when to call a valuation expert, and how to have an intelligent conversation on valuation.

Reviewed by Nicola Searle on Wednesday, June 29, 2016 Rating: 5
The IPKat licenses the use of its blog posts under a Creative Commons Attribution-Non Commercial Licence.