The IPKat discovered, via a chat with his friend Stephanie Bodoni (Bloomberg's ace reporter of all ECJ developments), that US brewer Anheuser-Busch has won the exclusive right to use the term Budweiser as a trade mark in Italy. On Thursday 15 March an Italian appellate court in Rome struck down Czech rival Budvar's bid to secure trade mark registration of the words Budweiser Budbrau and Budweiser Budvar. Anheuser-Busch, who have owned the trade mark rights to the name Budweiser in Italy since 1990, said:

"By rejecting another set of Budejovicky Budvar's trademarks, the appellate court further solidifies our exclusive rights to the Bud and Budweiser trademarks".

The two brewers remain locked in combat in almost 40 court cases worldwide, not to mention a further 40 administrative proceedings before patent offices. 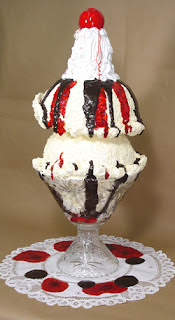 After a little administrative hiccup, IPKat team blogger Jeremy has been readmitted to the select group of persons who receive the European Copyright and Design Reports for their pains. Published six times a year by Sweet & Maxwell, the ECDR is now edited by Dr Uma Suthersanen. The March 2007 issue contains reports of three cases:

* SGAE v Rafael Hoteles SA, the ECJ's ruling on whether the act of programmes to television sets in hotels was a communication to the public even though the rooms were private;

* A sweet (in more ways than one) ruling of the Warsaw District Administrative Court, Poland, on an application for cancellation of a registered design for a "one-taste extruded ice-cream with filling";

* Another design case, this time the England and Wales battle between Procter & Gamble and arch foes Reckitt Benckiser over the right to make a particular shape of air spray container.
Budweiser victory for A-B in Italy; Latest ECDR

Reviewed by Jeremy on Friday, March 23, 2007 Rating: 5
The IPKat licenses the use of its blog posts under a Creative Commons Attribution-Non Commercial Licence.