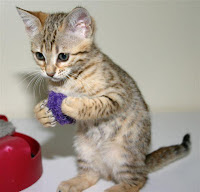 Having had a chance to read Kaul a little more closely, the IPKat is a little wiser than he was before. So here's his explanation, keeping closely to the wording of the decision where appropriate.

Right: it's a sad fact, but the chances are that, if you were a kitten when the ARCOL Community trade mark application was filed, you'll be unlikely to live to see the outcome of the Kaul's opposition proceedings.

This was an appeal by the Office for Harmonisation in the Internal Market (OHIM) against the Court of First Instance ruling in Case T‑164/02 Kaul v OHIM – Bayer (ARCOL) [2004] ECR II‑3807, in which the CFI annulled a decision of the Third Board of Appeal to reject Kaul's opposition to an application to register the word ARCOL as a Community trade mark. The CFI concluded that the Board of Appeal had wrongly found that points of fact that had not been submitted to the Opposition Division of OHIM (which heard the opposition at first instance) could not be produced for the first time by Kaul before the Board of Appeal. According to the CFI, the Board of Appeal had to take such points of fact into account in order to give a decision on the appeal brought before it.

To put it another way, step-by-step:

1. The applicant sought to register ARCOL; Kaul opposed, arguing that there was a likelihood of confusion with its earlier mark CAPOL.

2. The Opposition Division rejected the opposition.

3. Kaul appealed to an OHIM Board of Appeal, seeking to admit fresh evidence. This evidence sought to substantiate a ground of opposition that had itself been raised before the Opposition Division, which was that its word mark CAPOL was entitled to a greater degree of protection on account of its well-known character. To substantiate its well‑known character Kaul produced a declaration in lieu of an oath from the applicant’s managing director and a list of its customers.

4. The Board of Appeal dismissed the appeal, saying that it could not consider evidence that had not been before the Opposition Division.

5. Kaul appealed to the CFI, saying that the Board of Appeal was wrong to refuse to consider the fresh evidence.

6. The CFI allowed Kaul's appeal, saying that the Board of Appeal should have considered that evidence.

7. OHIM appealed, saying that the CFI was wrong to say that the Board of Appeal should not have said that it could not hear evidence that had not been heard by the Opposition Division.

The ECJ considered that, while the Board of Appeal could not be forced to consider evidence that had not been placed before the Opposition Division (Article 74(2) of Regulation 40/94), it was wrong for it to consider that it could not do so. The ECJ added:

"44. Where OHIM is called upon to give judgment in the context of opposition proceedings, taking such facts or evidence into account is particularly likely to be justified where OHIM considers, first, that the material which has been produced late is, on the face of it, likely to be relevant to the outcome of the opposition brought before it and, second, that the stage of the proceedings at which that late submission takes place and the circumstances surrounding it do not argue against such matters being taken into account. ...

47. It is consistent with the principle of sound administration and the need to ensure the proper conduct and effectiveness of proceedings that the parties have an incentive to respect the time‑limits imposed on them by OHIM when hearing a case. The fact that the latter may, if necessary, decide to disregard facts and evidence produced by the parties outside the time‑limits prescribed should, in itself, have such an incentive effect.

48 By preserving, nevertheless, the possibility for the department called upon to make a decision in a dispute of taking into account facts and evidence submitted late by the parties, that interpretation is, at least in respect of opposition proceedings, likely to contribute to ensuring that marks whose use could later on successfully be challenged by means of annulment proceedings or counterclaim are not registered".

So far so good. But was the CFI right to maintain that the evidence submitted by Kaul had been submitted in good time, with the result that the Board of Appeal was bound to consider whether to consider it or not? In a word, no.

"60. Article 59 of Regulation 40/94, which lays down the conditions for bringing an appeal before the Board of Appeal, does not refer to the submission of facts or evidence, but only to the filing, within a time‑limit of four months, of a written statement setting out the grounds of appeal.

61. It follows that, contrary to the finding of the Court of First Instance ..., Article 59 of the regulation cannot be interpreted as starting a new time‑limit for the person bringing such an appeal in which to submit facts and evidence in support of his opposition.

62. Consequently, the Court of First Instance erred in law in finding ... that the facts and evidence were submitted ‘in due time’ within the meaning of Article 74(2) and in inferring therefrom that the Board of Appeal was required to take that information into consideration in the decision which it was called upon to give on the appeal brought before it.

63. ... where ... such facts and evidence have not been submitted and produced by the party concerned within the time‑limit set to that end under ... Regulation No 40/94, and thus not ‘in due time’ within the meaning of Article 74(2) ..., that party does not enjoy an unconditional right to have such information taken into account by the Board of Appeal. On the contrary, that board has a discretion as to whether or not to take such information into account when making the decision which it is called upon to give.

64. It follows ... that, in finding ... that the Board of Appeal is required to take account of the facts and evidence submitted for the first time by the party opposing an application for registration of a mark in the written statement lodged in support of its appeal before that board against a decision given by an Opposition Division, and in annulling the contested decision merely because the Board of Appeal refused ... to take account of such information, the Court of First Instance infringed the combined provisions of Articles 42(3), 59 and 74(2) of Regulation 40/94".

Although the words "continuity of functions" only appear in the submissions and not in the ECJ's decision, it is apparent that the court accepts the principle that a Board of Appeal, where appropriate, should take account of late-submitted evidence even if it causes the complexity of opposition procedure to expand as it begins its trek through the lower reaches of the CTM's four-tier system.

The IPKat, having finally got his catty little head around the issues, must confess that he is now very fond of this decision. He hopes that the CTM applicant isn't in any hurry to use his applied-for mark, though, since the simultaneous demise of both CFI and Board of Appeal decisions leaves the opposition back at square one. Merpel adds that the original application to register ARCOL was filed at OHIM on 3 April 1996, nearly eleven years ago.
Three cheers for four tiers - Kaul explained

Reviewed by Jeremy on Wednesday, March 14, 2007 Rating: 5
The IPKat licenses the use of its blog posts under a Creative Commons Attribution-Non Commercial Licence.