Pomp - under no circumstance

Jeremy Friday, March 16, 2007 - Aerotel/Macrossan, Exclusions from patentability, Jeremy Phillips
On 27 October last year, in the combined cases of Aerotel/Macrossan, Lord Justice Jacob noted that the decisions emanating from the Boards of Appeal of the European Patent Office on subject matter that is excluded from patentability were not of a uniform nature. He said:

"The decisions of the EPO Boards of Appeal are mutually contradictory. To say that is not to criticise anyone. On the contrary the Boards of Appeal have each done what they think is right in law – as befits tribunals exercising a judicial function. But surely the time has come for matters to be clarified by an Enlarged Board of Appeal. Under Art.112(1)(b) of the EPC the President of the EPO has the power to refer a point of law to an Enlarged Board where two Boards of Appeal have given different decisions on that question. That is now clearly the position. There are indeed at least four differing points of view. We have no power to refer any question and must reach our decision now independently of what any Enlarged Board might decide if and when there is a reference. Nonetheless we have ventured to formulate questions which might be asked of an Enlarged Board in the hope of encouraging a reference. We add that the Comptroller supports us in this course". 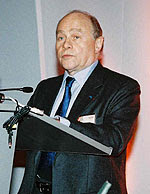 Well, here's the text of the reply by President Pompidou (right) of Epoland to Lord Justice Jacob (with the sincere bits at the end omitted).

I am writing to you to let you know that the above-mentioned decision has led to a discussion within the EPO as to the possibility of referring questions regarding the exclusions to patentability set out in Article 52(2) EPC to the Enlarged board of Appeal.

On the basis of these discussions I have decided that at the moment there is an insufficient legal basis for a referral under Article 112(1 )(b) EPC. Leaving aside Board of Appeal case law the line of reasoning of which has been abandoned by later case law, I believe there are insufficient differences between current Board of Appeal decisions dealing with Article 52 EPC exclusions on important points of law that would justify a referral at this stage.

The IPKat thinks this is an opportunity missed. An Art.112(1)(b) reference, made before the next contested patent application hits the EPO, would at least enable the Enlarged Board to consider the issues relating to excluded subject matter without coming under the pressures on a live, contested application. Also, it would enable applicants to know more swiftly and easily whether it would be worth expending effort and resources on a borderline invention. Merpel says, I'd like to know more about the "insufficient legal basis". Perhaps Monsieur le President's reading of the EPO decisions can be called upon as an interpretational aid that can help reconcile approaches which appear, to the North of the Channel, to be in conflict. [Whoops - nearly forgot to thank James Heald, UCL, for drawing his attention to this].
Pomp - under no circumstance

Reviewed by Jeremy on Friday, March 16, 2007 Rating: 5
The IPKat licenses the use of its blog posts under a Creative Commons Attribution-Non Commercial Licence.