"If you are seeking to understand the approach in various jurisdictions to an issue of patent litigation or require some general advice on patent law in a particular jurisdiction, a new publication entitled International Patent Litigation: Developing an effective strategy (2nd Edition) (hereafter “International Patent Litigation”) is sure to shed some valuable light on your task. 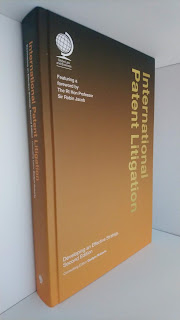 This late 2018 publication by Global Law and Business Ltd provides an easily digestible commentary on patent litigation law and practice in 21 jurisdictions including the United States, Germany, Japan, Australia and the United Kingdom. International Patent Litigation is bound to become a valuable aid to private practice and in-house practitioners alike, as well as students of IP law.

Edited by Gwilym Roberts, each chapter of International Patent Litigation is authored by leading practitioners of the featured jurisdiction, many of whom are well known international experts in IP and patent law. The first chapter sets the scene by providing an overview of patent filing and prosecution before the European Patent Office. While acknowledging that the EPO is essentially a patent-granting authority, the summary of EPO law and practice and in particular the outline of opposition proceedings, provides an essential background to understanding available options for pursuing multijurisdictional patent litigation in Europe.

Following a section on the UPC, subsequent chapters explain patent litigation on a country-by-country basis and in a consistent format. Each chapter initially outlines the legal requirements to practice and the court system, before moving on to discuss procedures and timetables, discovery/disclosure, the law (eg infringement and validity), remedies, costs and hot topics.

Presented in such a consistent format, the similarities and differences of the featured jurisdictions are easy to spot even for the casual observer. By way of example only, it is perhaps not surprising that most jurisdictions appear to adopt a relatively similar approach to costs awards - in general terms the losing party pays the winning party’s costs. However, despite the overall similarity, there are some interesting peculiarities – the Danish approach to court costs left me a little confused.

What amounts to a primary infringement also seems to be relatively consistent among the various jurisdiction, which again is not particularly surprising (eg make, use and put on the market etc.), albeit that the explanation of what amounted to an infringement varied slightly in accordance with each jurisdiction.

Where there is slightly less conformity is in the area of discovery or disclosure. The process of disclosure adopted in the US and the UK is generally not reflected in many other countries including China, France, Spain and Germany though the courts in some of these jurisdictions seemed to retain a right to order disclosure in certain specific cases.

A contemporary aspect of International Patent Litigation is the inclusion of the “Hot Topics” section. For the casual reader this provides a very interesting comparison on where the law has arrived at in the featured jurisdictions. Hot Topics identified by authors include proactive case management (Australia); whether spare parts for a patented invention can infringe a patent (Austria); business method patentability (China); the UPC; SEPs and the doctrine of equivalence (Germany); regulation of the discovery process (Hong Kong); and plausibility (UK).

While the natural audience for International Patent Litigation is likely to be those interested and practising in patent law, the structured approach used in the book to describe litigation in each of the featured jurisdictions mean that certain sections, including those relating to injunctions, evidence and costs, have value beyond patent litigation alone. I have already referred to the injunction sections outside the context of patent litigation.

So, if you are looking to start the New Year by brushing up on patent law and practice, attempting to understand the peculiarities of patent law internationally or are simply the casual reader, then I can recommend International Patent Litigation as an interesting place to begin."

Reviewed by Eibhlin Vardy on Monday, January 21, 2019 Rating: 5
The IPKat licenses the use of its blog posts under a Creative Commons Attribution-Non Commercial Licence.