The Claimant allege infringement based on various uses on the defendant's products - such as those set out below. 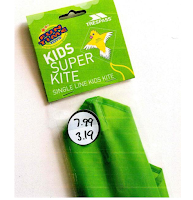 There were three main issues:

There were two questions to be considered: (i) were the FUNTIME marks inherently distinctive? (ii) if not had they acquired distinctiveness through use?

Spoiler alert: yes on both counts. Read on to find out why.

The judge identified the average consumer as an adult buying toys for young children. As the judge, Douglas Campbell, noted "the young children may not be paying very much attention to the trade marks, the packaging, or indeed anything at all in their enthusiasm to play with the goods in question."

It was agreed that the average consumer would exhibit a low level of attention. 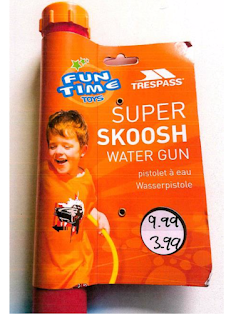 Did Trespass infringe (under section 10(2) TMA)?

Campbell quickly (and in my view, rightly) concluded that the Defendant’s use would not be regarded by the average consumer as anything other than trade mark use.

As he noted FUNTIME "is presented to the consumer in much the same way as TRESPASS is presented, ie as being something other than the name of the product (Super Skoosh Water Gun, or Kids Super Kite) and as being an indication as to who supplies it. The average consumer, particularly if paying little attention, would probably regard the Defendant’s logo as a sub-brand or co-brand along with TRESPASS."

The remaining elements quickly fell into place. The signs are undoubtedly "very similar" whether or not the descriptive word TOYS and small stars are considered. The sign was used in relation to identical goods (i.e. toys). As Campbell summarised, "These are powerful factors pointing in favour of infringement, even ignoring any enhanced distinctive character of the FUNTIME mark which has been acquired through use."

The presence of TRESPASS on the packaging did not prevent the likelihood of confusion as "the average consumer would still probably have thought that FUNTIME was owned by the owner of TRESPASS or at least that there was some economic connection between the two."

Infringement of the UK and EU marks was therefore established.

Did Trespass infringe (under section 10(3) TMA)?

Everyone was in agreement that this claim didn't add a great deal. Campbell was understandably unwilling to address the thorny issue of whether use of an EU mark in one member state is enough to establish a reputation in the EU for the purposes of Article 9(2)(b) so simply considered this issue from the point of view of the UK mark.

In short:
Consequently, the 10(3) bingo card was complete and infringement was also found on this basis.

Reviewed by Rosie Burbidge on Tuesday, January 29, 2019 Rating: 5
The IPKat licenses the use of its blog posts under a Creative Commons Attribution-Non Commercial Licence.